Last Sunday, following the morning service, Elder Jim Roush was officially proclaimed “Elder Emeritus” in recognition of his 27 years of faithful service as an elder of New Hope Presbyterian Church.

Jim first moved to Bridgeton, New Jersey from the coal mines of Pennsylvania in 1953 to work in the glassworks at Owens Illinois. Having only attended Sunday School back home in Pennsylvania–they didn’t have a worship service–Jim began attending Sunday School at Calvary Orthodox Presbyterian Church, which at the time was located on Commerce Street in downtown Bridgeton. With encouragement from elder Russ Lodge and from Bill and Betsy Holder, he subsequently began to attend worship services as well. In 1956, he and Helen were married by Pastor Ralph Clough and subsequently joined the church.

Ten years later, in what was then considered the “new building” (at our present location of 65 Hitchner Avenue, in the neighborhood across from the Bridgeton High School), Jim was officially ordained as an elder to serve on Calvary’s session. For 27 years Jim faithfully shepherded the congregation as an active elder and overseer until he officially retired from active duty status in 1993.

When an elder has faithfully served a congregation for a length of time and then steps down from active service, he is often designated “Elder Emeritus” as a way of expressing appreciation for his service and of acknowledging that he is no longer actively serving. In Jim’s case, he declined the offer for many years, saying that he is “just a humble servant of the Lord” and seeking to avoid calling attention to himself. However, the session persisted, and on Sunday, December 8th, Jim was presented with the following: 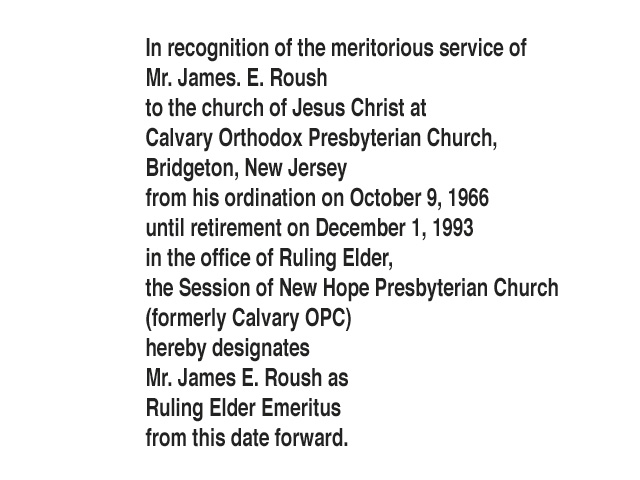 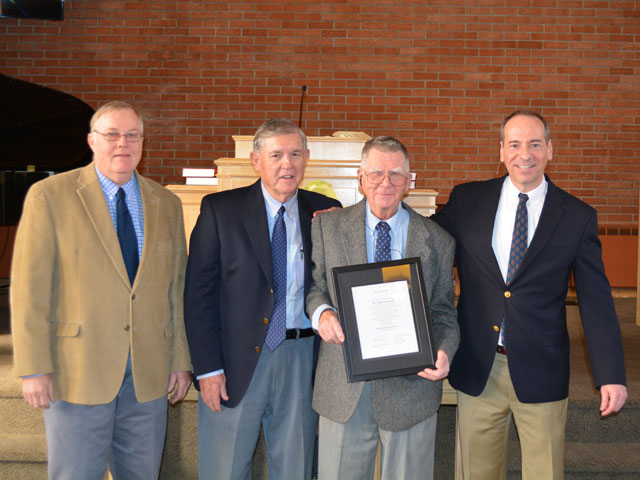