I am how I act

I am how I act from Paul Tripp Ministries, Inc. 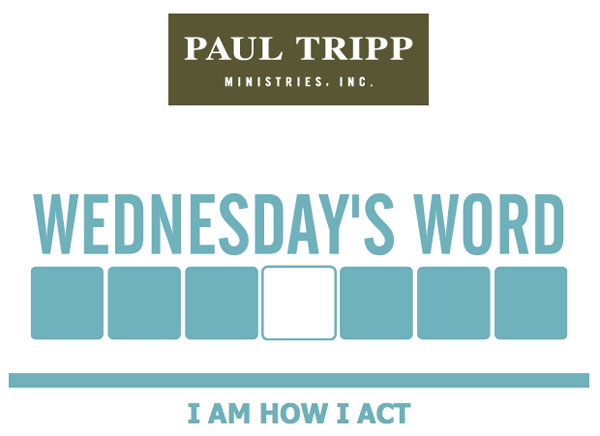 We’re in the middle of a series focusing on identity, examining some dangerous places where we substitute identity “in Christ” for identity in the created world. Last week, we considered our misplaced identity in relationships and the week before, identity in achievement.

Today I want share a third identity trap with you through the vignette of a man I knew named Joe. His struggle was that he misplaced his identity in his personal spiritual performance.

When Joe first met Jesus, he was overwhelmed by his desperate need for God’s grace. He saw his sin everywhere and was constantly thankful for the daily mercy and patience of the Redeemer.

Since no one is better at giving grace than the person who knows they need it most, Joe was patient with the people around him who struggled. He knew that they were essentially no different from him and that he was only kept by God’s grace.

But as Joe grew older, something began to change in his heart. He felt as though he deserved to be a child of God. He was proud of his theological knowledge and had little patience for Christians who weren’t motivated to study their faith. He looked down on brothers and sisters who struggled faithfully to participate in public worship and small groups.

When Joe put his check in the offering plate on Sunday, he scanned the sanctuary wondering who was getting a “free ride.” He loved to show people the photo albums of the many short-term missions trips he had been on, and he didn’t understand why some people were never willing to give up one week to serve God. The once tender, grateful Joe had given way to a hard and self-assured Christian man.

What was Joe’s ultimate problem? He misplaced his identity “in Christ” and transferred it over to his personal spiritual performance. He didn’t realize what was happening, but Joe started to approach every Christian activity as an opportunity to put another notch in his belt of righteousness.

Before we distance ourselves from Joe, let’s humbly consider that we may be more like him than unlike him. It’s tempting to respond to Joe like the Pharisee does in Luke 18 (“God, I thank you that I am not like other men…”), but isn’t that exactly what Joe said to God? Wasn’t he essentially declaring that he didn’t need grace as much as the others?

Brothers and sisters, could it be that although we’re heavily active in church, we’re doing it out of a sense of duty instead of with a willing, loving and worshipful heart? Might it be that in what we say we do for God, we actually do for ourselves and our own misplaced personal identity?

Here’s what you need to ask yourself: “Do I live today like I need Christ’s grace as much as the first day I believed?” Or is there evidence of a cold-hearted, duty-bound relationship to religion? It’s a hard pill to swallow when you find out that you’ve left a Pharisee’s legacy, but God will transform us, even when we don’t think we need his grace.

Don’t attempt to place your identity in your personal spiritual performance; the whole reason Christ came to earth was because our performance was inadequate! Rather, rest in the perfect performance of Christ on your behalf and live in humble, loving and grateful relationship with God and others.

What was your life like when you first came to know Christ?

How have you matured since your early days of faith? Who deserves the credit for your spiritual growth?

In what ways has your passion for the Lord faded since those early days? Why could that be?

What evidence is there in your life that you might be more like Joe than unlike him?

What can you do to live like you need Christ’s grace as much as the first day you believed?