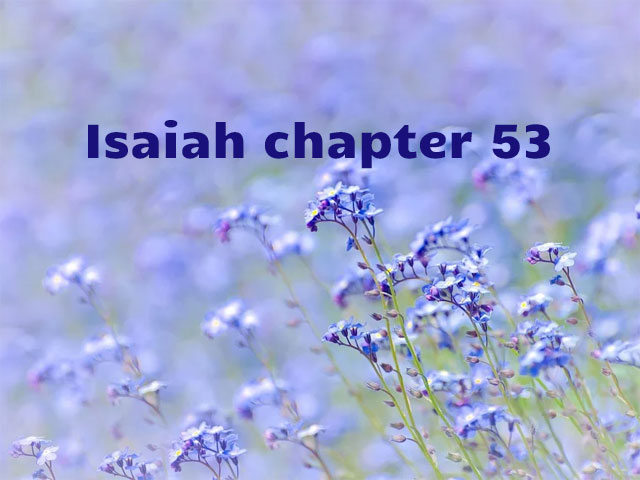 “Every verse of the chapter [Isaiah chapter 53] except verse 2…is applied to Jesus in the New Testament, some verses several times. Indeed, there is good evidence that [Jesus’] whole public career, from His baptism through His ministry, sufferings, and death to His resurrection and ascension, is seen as a fulfillment of the pattern foretold in Isaiah 53”.   –John Stott

“Though He had done so many signs before them, they still did not believe in Him, so that the word of Isaiah might be fulfilled, “Lord, who has believed what he heard from us, and to whom has the arm of the Lord been revealed?” (John 12:37,38)

“That evening they brought to Him many who were oppressed by demons, and He cast out the spirits with a word and healed all who were sick. This was to fulfill what was spoken by the prophet Isaiah: “He took our illnesses and bore our diseases.” (Matthew 8:16,17)

“For I tell you that this Scripture must be fulfilled in Me, ‘And He was numbered with the transgressors’.” (Luke 22:37)

“He committed no sin, neither was deceit found in His mouth. When He was reviled, He did not revile in return; when He suffered, He did not threaten, but continued entrusting Himself to Him who judges justly. He Himself bore our sins in His body on the tree, that we might die to sin and live to righteousness. By His wounds you have been healed. For you were straying like sheep, but have now returned to the Shepherd and Overseer of your souls.” (1 Peter 2:22-25)

“Now an angel of the Lord said to Philip, ‘Rise and go toward the south to the road that goes down from Jerusalem to Gaza.’ This is a desert place. And he rose and went. And there was an Ethiopian, a eunuch, a court official of Candace, queen of the Ethiopians, who was in charge of all her treasure. He had come to Jerusalem to worship and was reading the prophet Isaiah. And the Spirit said to Philip, ‘Go over and join this chariot.’ So Philip ran to him and heard him reading Isaiah the prophet and asked, ‘Do you understand what you are reading?’ And he said, ‘How can I, unless someone guides me?’ And he invited Philip to come up and sit with him. Now the passage of the Scripture that he was reading was this: ‘Like a sheep he was led to the slaughter and like a lamb before its shearer is silent, so he opens not his mouth. In his humiliation justice was denied him. Who can describe his generation? For his life is taken away from the earth.’ And the eunuch said to Philip, ‘About whom, I ask you, does the prophet say this, about himself or about someone else?’ Then Philip opened his mouth, and beginning with this Scripture he told him the good news about Jesus.” (Acts 8:26-35)