Ministry To Those Suffering in Eastern Europe 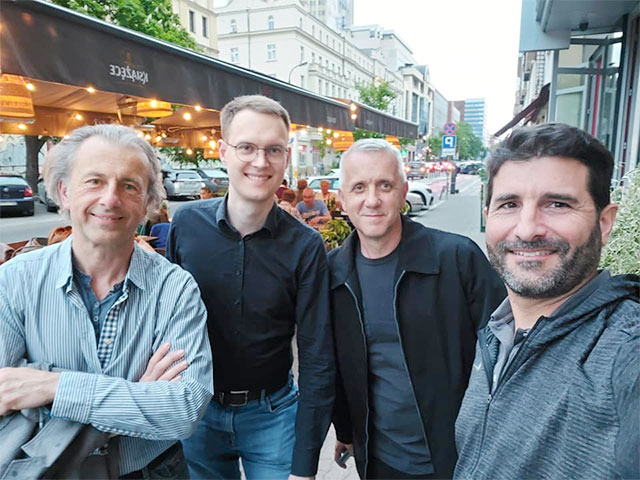 Ministry To Those Suffering in Eastern Europe​

By David Nakhla, Administrator for the OPC Committee on Diaconal Ministries

“We want you to know, brothers, about the grace of God that has been given among the churches of Macedonia…begging us earnestly for the favor of taking part in the relief of the saints.” II Corinthians 8: 1 & 4

Five countries, nine days, ten organizations; a whirlwind trip, to be certain! My travelling companion, Rich Bout, URCNA Missions Coordinator, and I were quickly made aware of the deep appreciation of the people of Ukraine for the love, concerns, prayers, and encouragement from afar. The value of the communion of the saints cannot be under-estimated.

Despite the short visits that such an assessment survey requires, there is no better alternative to visiting in person. Talking while walking Europe’s cobblestone roads. Driving alongside the bright yellow fields of Hungary and Poland where rapeseed is grown and used to produce canola cooking oil.  Discussing the ministry around a minister’s kitchen table. Visiting with a Ukrainian refugee mother and her seven children around a table in an almost 100-year-old church building in Lithuania (a building that for the majority of its existence was used for anything but a church, evidenced by lines on the floor created for basketball during Soviet occupation.) This was our journey; fast, unique and unforgettable. The purpose? To identify and come alongside ongoing ministries of like-minded Christians in order to prayerfully and knowledgably consider how to use Ukraine Crisis Funds.

In Krakow, we met with several members of the Mission to the World (MTW) team, now displaced by the war, having served in church-planting in L’viv, Ukraine, alongside OPC missionaries, Heero and Anya Hacquebord. At the outset of the war, many of the missionary families left their homes in L’viv due to, among other things, the trauma inflicted upon them and their children by the continual missile warning sirens. These missionaries have temporarily resettled in Airbnb lodging 200 miles west in Krakow, Poland. PCA minister and team leader, Doug Shepherd, has been separated from his wife, Masha, and their children for much of the past three months, spending a great deal of time back in L’viv, coordinating relief efforts there.

In Lithuania, we met two sisters, who, with their children, escaped Ukraine and now live under the roof and care of the saints in the Lithuanian Reformed Church in Kaunas, Lithuania. (This is where Rev. Frank Van Dalen serves as a missionary of World Witness, the missions agency of the Associate Reformed Presbyterian Church [ARP]. During the current Ukraine crisis, Frank has been helped by Bryce Klassen, a URCNA seminary student). The older of the sisters escaped from Mariupol. She and her two boys had remained in their besieged city until late March when supplies were running desperately low and the dangers of the encroaching Russian army were increasing. Having run out of drinking water and fuel, they resorted to boiling dirty snow over an open fire on the sidewalk, risking injury or even death from incoming missiles, especially dangerous with no warning sirens in their city. In preparation to depart Mariupol, they spent days patching up their ruined car, using clear plastic to replace shattered windows and supplementing its punctured tires with whatever could be salvaged from other abandoned vehicles. They were forced to make the difficult and potentially life-and-death decision to drive through the supposed “humanitarian corridor” (about which they had heard stories of buses full of evacuees being shot and killed) or driving east toward the Russian front with the hopes that they might be granted passage into Russia. With little knowledge of what lay beyond, faces downcast with shame and eyes brimming with tears, they headed toward Russia where they endured humiliation at the hands of the Russian soldiers who permitted them to pass only after removing their clothing for inspection; searching for potential evidence of their part in the Ukrainian resistance. By God’s grace they were permitted passage, and once in Russia, they were able to drive south to neighboring Georgia and board a flight to the Baltics, where they now reside under the loving care of the church. Yet, they will inevitably carry the scars of this traumatic experience for a lifetime.

In Hungary, we visited a hotel building designated to house Ukrainian refugees. We witnessed young Ukrainian mothers huddled with their young children. Their husbands and fathers have been forced to remain in Ukraine to fight for their country. The women and children are left vulnerable to exploitation. This is not unique. In Krakow, one of the missionaries with whom we interacted reported seeing Ukrainian women selling themselves in desperation to provide for their families.

These families now live in limbo while this unfolding disaster’s end remains unknown; will they ever have a Ukrainian home to return to? Will they be rejoined to their husbands and fathers, or will they be orphaned and widowed as a result of this senseless war? Should they move on and settle more permanently elsewhere, or do they wait for the conclusion to become clearer?

Some have opted to venture further into Europe and beyond in search of a permanent settlement outside of Ukraine. In Rome, we met with two URCNA missionaries, Mike Brown and Andrea Ferrari, church-planters in Milan and Perugia respectively. Mike shared the story of the refugee family his church in Milan received from Kharkiv, members of the Evangelical Presbyterian Church of Ukraine (EPCU). The family drove more than 1600 miles, bringing all they could fit into the car, while the kids crammed on their laps and endured car-sickness and hunger, all while fearing they might not have enough money for fuel. He said they were visibly traumatized but he sees slow improvement through the love and care of the local congregation.

Others desire to stay in nearby countries such as Poland and Lithuania, where they have been warmly welcomed and remain close enough to Ukraine to imagine a return, someday, if maybe only for a visit.

We had the privilege to witness firsthand, on behalf of the body of Christ in each place, a consistently generous and gracious outpouring of love, compassion, and mercy. We witnessed, first-hand, the warm welcome and care the Ukrainian refugees have received in each country: Hungary, Poland, Lithuania, and Italy. During our visit to the fifth country on our journey, Slovakia, (our route to drive from Hungary to Poland) a Polish man reported that Ukrainians were being welcomed into Poland as if they were adopted as a province! Surely, the Lord is gracious!

Further encouraging to us was to see the way that the indigenous church in each of these countries has organized various efforts to carry out an effective ministry of mercy to those suffering—even when they don’t share the same language, culture or history; the body of Christ serving as Christ’s hands and feet, to demonstrate compassion toward the stranger and the oppressed. The Reformed Presbyterian Church of Central and Eastern Europe (RPCCEE), a small denomination of sixteen or so churches in the Great Hungarian Basin (Hungary, northern Romania, and a small section of western Ukraine) raised tens of thousands of dollars “out of their poverty.” (2 Corinthians 8:2) They opened wide their church doors to welcome in refugees, housing as many as twenty-five at one time. (The flow of refugees in that region has now subsided, but the care of refugees there continues.) The Lithuanian Reformed Church generously made room in their building for housing and feeding refugees. The Evangelical Presbyterian Church in Krakow, Poland, has been nearly displaced by the influx of the MTW team members and the hordes of refugees flowing into Krakow, yet it has embraced this as its privilege to suffer for the sake of Christ. This congregation ambitiously desires to host an all-summer VBS for Ukrainian children, in order to alleviate boredom, as online school studies come to an end. These are faithful, willing sacrifices for small, young churches to undertake.

With considerable donations available, much discernment is required, so as not to overwhelm the good work that is currently being carried out. Following the lessons of the now go-to book on the subject of charity, “When Helping Hurts”, we need to ask ourselves, how do we help without hurting? In this instance, we need to consider how to best aid the good labors of the indigenous churches as they seek to faithfully carry out their responsibility with the resources the Lord has entrusted to them, without overwhelming those good labors.

What became clear to us is that the volume of funds collected by various organizations has far exceeded the current usability of most organizations. Giving toward the refugee crisis in Ukraine has been tremendous, to say the least; and the OPC Ukraine Crisis Fund is no exception. Never in its history has OPC Disaster Response had such an amazingly generous answer to a call, with more than $600,000 received in under three months. The work on the ground in this region, while fast, furious, and diligent, has not been able to keep up. This requires patience in the use of funds given, while those on the frontlines seek the best avenues for the use of those funds. Not all the funds are required today. The needs are great and will be responded to over time, that response looking different at each phase of this evolving situation.  All look forward to that day when the death and destruction is finished and lives and homes are able to be rebuilt, requiring substantial energy and resources.

Obvious to us was a tremendous concern for those remaining in Ukraine, particularly Eastern Ukraine. The dangers and risks to those left behind, many of them elderly and infirmed, are immense: a lack of food, water and medicine, as well as energy shortages. In addition, churches and pastors in Ukraine are facing the challenges involved in ministering to a flock that has vanished. The RPCCEE had three congregations in western Ukraine. Most of the congregants have fled over the border into Hungary. Do the churches consolidate, and what would that look like, and when is a decision made? These are heavy weights and unique opportunities for prayer.

We are thankful to report a few developing short-term missions’ opportunities: the MTW team welcomes drivers (stick-shift) who are willing to come for a week or more to drive vans of supplies from Krakow to L’viv, and the EPCP pastor in Krakow has invited groups of 5-6 to come this summer to assist in running a series of week-long VBS programs for Ukrainian youth there.

There is also developing an MTW initiative referred to as, “Crates for Ukraine”. This is a wonderful opportunity for churches in North America to gather specific needed medical and health supplies into crates to be flown to Krakow, from where they will be transported deep into Ukraine. More info about this program can be found here.

Since our trip, some have asked Rich and me about the danger or devastation we encountered. Frankly, in many ways, besides the Ukrainian flags displayed generously throughout, it would have been hard to know that a war was raging in the neighboring country to the east. But, once we were involved in conversation, we quickly learned the devastating impact that this war is having on so many lives in that region and beyond.

Please know that those on the ground in and near Ukraine rely on the prayers lifted daily on their behalf. Please don’t stop praying and don’t forget Ukraine.

[This article is a summary of the Ukraine Ministry Assessment Trip carried out by David Nakhla, OPC Disaster Response Coordinator, and Rich Bout, URCNA Missions Coordinator May 10-18, 2022. Details of the plans for this trip can be found here.]

Ministry To Those Suffering in Eastern Europe