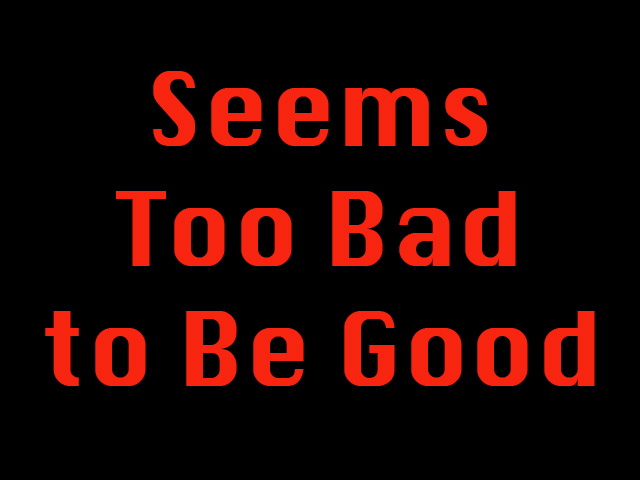 If something seems too good to be true, it probably is. But could anything that seems so horrible be in any way good?

Consider the cross of Jesus Christ on Good Friday. If you were Jesus’ followers or family, the crucifixion makes no sense. The world is out of control. The bad guys will have the final word. Darkness is winning the day.

Could it be possible for something to happen that was more terrible than this? Could any injustice be greater? Could any loss be more painful? Could any suffering be worse?

The only man who ever lived a life that was perfect in every way possible, who gave his life for the sake of many, and who willingly suffered from birth to death in loyalty to his calling was cruelly and publicly murdered in the most vicious of ways.

How could it happen that the Son of Man could die? How could it be that men could capture and torture the Messiah? Was this not the end of everything good, true, and beautiful? If this could happen, is there any hope for the world?

But God had different plans:

In your weakest,
most vulnerable,
seemingly helpless,
public-shame
moment,
hanging on a rough-hewed cross
between
heaven and hell,
nailed,
bleeding,
thirsty,
life ebbing out of you,
victim,
mocked and scorned,
you were a
conquering King—
not defeated,
the victor.
Seemingly defeated,
you conquered
sin,
Satan,
death.
Put to shame,
you were putting to shame
all who would shame you.
Not cowering
in fear,
you were parading your
sovereign glory,
unleashing your
transforming grace,
expediting your
redemptive plan.
The darkest moment ever
became the brightest moment ever.
The greatest defeat
became the greatest victory.
The moment of death
was a triumph of life.
You were where you came to be,
doing what you came to do.
You did not surrender
for a moment
so that we could
stand firm for a lifetime.
You did not give in to
defeat
so that we would experience
victory.
Everything you suffered was
for us.
Every battle fought was fought
for us.
Every victory won was won
for us.
In your moment of
apparent defeat
you became forever
our victor.

Your Father is committed to taking what seems so bad and turning it into something that is very, very good.

The same God who planned Good Friday is your Father. He rules over every moment in your life, and in powerful grace, he can do for you just what he did in redemptive history: take what seems so bad and turn it into something that is very, very good.

He takes the disasters in your life and makes them tools of redemption. He takes your failure and employs it as a tool of grace. He uses the “death” of the fallen world to motivate you to reach out for life.

The most challenging things in your life become the sweetest tools of grace in his wise and loving hands.

1. What was promised to you recently that seemed too good to be true, and indeed turned out to a false promise?

2. How does the enemy promise you life and freedom when in fact it only leads to death and bondage? How have you experienced this before? What is he using to lure you into temptation today?

3. What seemingly bad thing have you experienced in the past that ended up being for God’s glory and your redemptively good?

4. What painful thing are you enduring right now? What are you telling yourself about you and God? Are you increasing your suffering because you are not preaching the gospel to yourself?

5. Who do you know who is suffering? How can you incarnate the love of Christ and remind them of the resurrection power and promises that are theirs by grace? Be specific, then get to work!