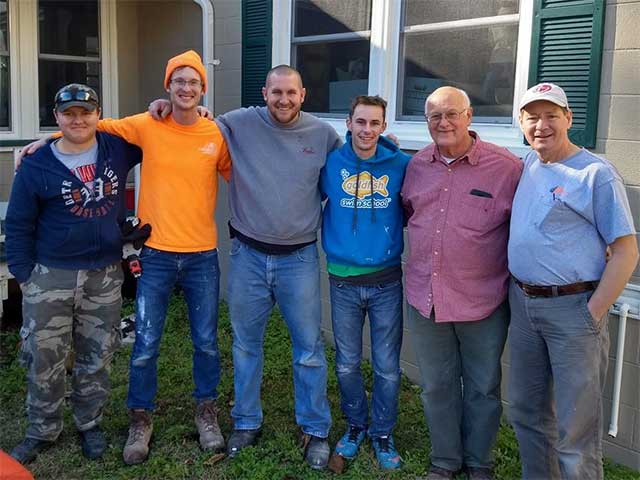 Serving Freely and Graciously,
With Such Glad Hearts

Show yourself in all respects to be a model of good works… Titus 2:7 (ESV)

Charles Sexton has been a member of Covenant OPC in New Bern, NC, for the last 10 years or so. He recently retired from his own commercial refrigeration business, and had been accustomed to doing all kinds of physical labor himself. So he was surprised to realize after Hurricane Florence flooded his property that the work of recovery was too big and too hard for him to do himself.

This is when his local presbytery diaconal committee and OPC Disaster Response stepped in.

Charles received a team from Pennsylvania that removed damaged and sodden items from his home; a team from his own church in New Bern cut down trees and removed trees that had landed on the roof; a team from Matthews OPC (Matthews, NC), tore out floors; a team from Geneva OPC (Woodstock, GA), put in new floors; and two teams from Michigan are doing the drywall and other finishing work. Charles was impressed by a Duke medical student from Pilgrim OPC (Raleigh, NC) who took the time to come and work at his house one Saturday.

Charles found his experience with presbyterianism in action to be life-changing.

“In general, it has been just amazing. God is always working to sanctify us, and this experience has been very humbling for a man who owned his own business and was always able to meet any challenge. But now, at 70, I found I wasn’t able to, and to see these men come in so freely and graciously, with such glad hearts, giving of themselves and their time, has been very humbling and beneficial.

“The teams understood better than I did the extent of the emergency. The team members worked so well together, as if they had done it a hundred times. They were able to get in there and quickly take direction and work like a family. There is no limit to what I could say about them…their devotedness to God, their kindness, their willingness to not let you feel guilty for not helping – they want to do the work for you. It has been good for me to see how God takes care of us, practically speaking. He always does, but we don’t always see it so clearly or give him the glory.

“It is not only the work they did, but the joy of meeting these men. For instance, the way Team Leader Jeff Davis speaks to you, he gives you the feeling that he knows exactly what you are going through, and he knows how you need to be comforted. Jeff was not only a team leader but a brother in Christ.

“And you couldn’t find a better man than Site Coordinator Fred de Ru to come into an area unknown to him and deal with people and their situations so well, and be so able to encourage us with prayer and exhortation. Fred has been a real help to me in dealing with all of this personally.

“This experience has also been profitable for me in that I see that the part of my life that included physical labor may be over, but I look forward to seeing what the Lord will have me do next.”