Why do we so easily become burned out? 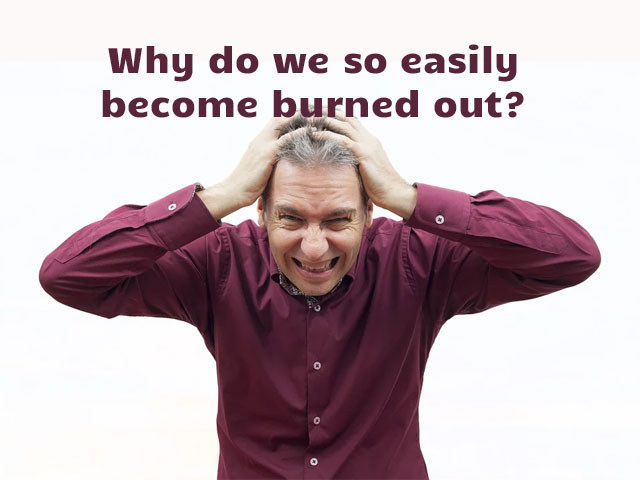 Why do we so easily become burned out?  What is missing when we don’t live by grace?

Also absent is the moderating power of grace. Alongside Mr. Grace, Mr. Perfectionist takes pride in flawless performance. If he ever makes a mistake in his work, he berates and flagellates himself. He carries this legalistic perfectionism into his relationships with God and others, resulting in constant disappointment in himself, in others, and even in God.  Mr. Grace’s work is just as high quality as Mr. Perfectionist, but grace has moderated his expectations. At the foot of the cross, he has learned that he’s not perfect and never will be. He accepts that both his work and his relationships are flawed. But instead of tormenting himself with these imperfections, he calmly takes them to the perfect God, knowing that in His grace, this God forgives every shortcoming and lovingly accepts him as perfect in Christ. He doesn’t need to serve, sacrifice, or suffer his way to human or divine approval because Christ has already served, sacrificed, and suffered for him.

The multiplying power of grace is also rare in burned-out lives. Back on the assembly line, some of the Christian workers are driven by production targets. If they fall short of their daily quotas of Bibles, they go home totally depressed because “Every Bible we fail to print and package is a soul unreached.” As everything depends on their sweat and muscle, they work tons of overtime and hardly have any time for personal prayer. Mr. Grace, however, works normal hours, and yet he has time and peace to pray for God’s blessing on each Bible that passes through his hands. He works hard, but he depends on God’s grace to multiply his work. He realizes that while one plants and another waters, God gives the increase. He goes home happy each evening, knowing that he has done what he could and, as he leaves the factory at 5pm, he prays that God will multiply his work far more than his muscles or hours could.

The releasing power of grace has often been lacking when a person burns out. Mr. Controller, for example, thinks everything depends on him. He gets involved in every step of the production process, constantly annoying other workers with his micromanagement. He’s infuriated by any breakdown in production, yelling at people and even the machines when they mess up. He says he believes in “sovereign grace”, but he’s the sovereign and grace is limited to personal salvation. In contrast, Mr. Grace realizes God is sovereign even in the nuts and bolts of life, and releases control of everything into His hands. He works carefully, but humbly submits to setbacks and problems, accepting them as tests of his trust in God’s control. In the midst of challenges and setbacks, he can often be heard whispering to himself, “Release, release, release.”

Another void in many breakdowns is the receiving power of grace. Unlike Mr. Grace, most of his bosses and fellow workers refuse to accept many of God’s best gifts. They won’t receive the grace of a weekly Sabbath, the grace of sufficient sleep, the grace of physical exercise, the grace of family and friends, or the grace of Christian fellowship. These are all gifts that our loving heavenly Father has provided to refresh and renew His creatures. Yet instead of humbly receiving them, most refuse and reject them, thinking that such graces are for the weak. Yes, it is more blessed to give than to receive. But if we don’t do any receiving, our giving soon dries up.

Why do we so easily become burned out?